For several months, I’ve been looking forward to tackling trail running over the holiday break.

The week did not disappoint … and it’s not over yet.

What made it all possible was New Balance’s (http://www.newbalance.com/) exemplary customer service. This year’s Gobbler Grind, which Kate and I ran last month, awarded its first 100 marathon registrants a pair of free shoes through a local running store. As the event’s 54th enlistee, I eagerly claimed my prize several weeks before the race.

Problem was, the store only had New Balance MR860s left by the time I arrived. They’re designed for moderate to severe pronators, which this neutral runner is not.

So, consistent with my tendency to thoroughly pursue every bargain, I called New Balance and explained my situation. What harm could it do?

None, as it turned out. Eric, the exceptional customer service agent with whom I spoke, understood my predicament and asked what kind of shoes I wanted in exchange for the MR860s.

A pair suited for trail running, I quickly replied. Several days later, a box of New Balance Minimus MT10s appeared on my doorstep.

The New Balance Minimus MT10 has enabled this week's pair of trail runs. Thank you, Eric!

They fit and function perfectly. I’ve already recommended them to Kate and a friend and will continue singing their praises to runners interested in hitting the trail.

The first run they made possible was a 5.15-mile tour of the nine miles of trails in Jackson County’s Landahl Park, whose trailhead is on Argo Road in Blue Springs, Mo. Kate and I tackled the trail Tuesday, and I’ve already filed the experience in my mental scrapbook.

The trail, which is described well at http://earthriders.com/trails/trail.php?s=mo&file=landahl.xml, is designed for mountain bikers and trail runners alike. Some stretches wind through fields, and others snake through wooded hills. Rocks were not a problem on the stretch of trail we ran, but plenty of exposed roots kept us on our toes.

After running about four miles of the trail, we doubled back and ran through the Landahl Park Archery Range. In the off-season, it’s fun to explore the shooting lanes and truck paths, which link together to form an interesting maze.

The workout reminded us that running a mile on trails is not as easy as running one on the road. With experience as my guide, I suspect a runner burns at least 125 percent of the calories expended on normal runs on trails.

The second trail system I ran was in George Owens Nature Park in Independence, Mo. It was unbelievable, and I’m thrilled such a great set of trails is just 15 minutes from home and only a block from our school district’s middle school campus.

As a kid, I spent time at the park with school, church and Scout groups. I never imagined it as trail running venue.

I ran eight miles Thursday in the park. Each of its three trail loops covers about a mile, and they’re connected by strips of roadway about a third of a mile long. I ran the park’s four-mile trail circuit twice, being sure to cover ground on the second pass I’d missed the first time through. 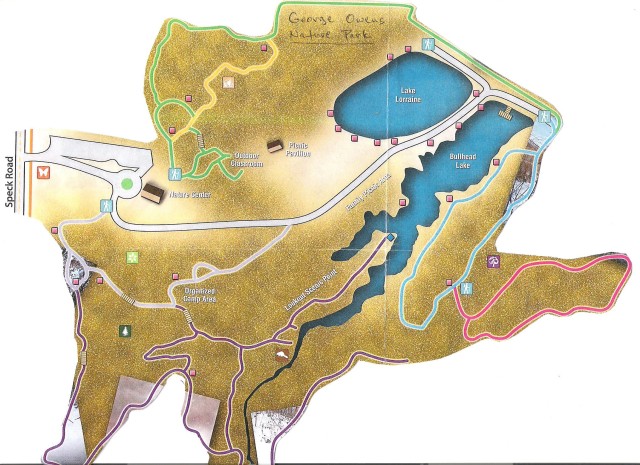 The cropped map of George Owens Nature Park gives a sense of its trails' configuration and placement.

Check out both runs by clicking the “Route of the week” links to the right of this post. Many Kansas City Runner readers live in metropolitan Kansas City, and I would highly recommend the trails to runners and walkers alike.

One of the coolest things we experienced on the trail runs was wildlife. Kate and I saw numerous birds in Landahl Park, and I ran up on a wild turkey and pair of deer in George Owens Nature Park.

I haven’t shared anything here trail running veterans don’t already know. But this Eagle Scout discovered this week that there’s nothing better than logging a run in the woods.

We wore bright clothes in Landahl Park so hunters wouldn't mistake us for their targets!

Beyond the pair of trail runs, our crew has logged other fun holiday jaunts: Kate and I did six easy miles on Christmas Eve, Tom joined us Wednesday for a four-miler that I stretched into 10 and I got in a marathon pace six-miler yesterday. We’ll do a long run this morning.

I wish you a happy new year! Whether you’re a beginner or veteran, it’s a great time to get out and pound the pavement.